It’s August and Football is Back!

Like the real world, the world of sports has seasons.  College basketball season ran through March with Virginia winning its first NCAA tournament. The NBA wrapped up in early June with the Raptors winning their first NBA championship.  We’re now currently in the middle of baseball season (Let’s Go Yankees!).

For many Americans and some international fans, the month of August means the NFL is coming back.  Preseason games have already begun and the regular season is set to kick off on Thursday September 5th.

If you’re unfamiliar with fantasy football, the traditional type of league is a season long competition where each individual drafts a team made up of real NFL players.  Each fantasy team is awarded points based on the performance of the NFL players. Fantasy teams with more points than their competitors each week are awarded a win. At the end of the season, playoff seeding is determined by number of wins during the season.  A championship match determines the league winner.

Before the season begins though, all of the news, strategy, and speculation that has been studied by each fantasy football player throughout the offseason culminates in the fantasy football draft.  This is the event that kicks off the fantasy season for every league and where each team picks their players to start the year. A typical fantasy football draft is conducted snake style where each team picks one player in the first round and then the order is reversed so that the last player in round one gets the first pick in round two.  The draft continues in this back and forth manner until each team’s roster is full.

This year, I have the good fortune of joining two of my favorite activities together by playing in a 16 team fantasy football league with several other Tableau enthusiasts.  Shout out to my fellow #DataFamtasy leaguemates!

Throughout the season, we’re going to be vizzing our fantasy football data.  As soon as I signed up for this fantasy league, I knew that I wanted to viz the draft.  The standard snake style draft board lends itself so well to being visualized in Tableau.  While my league hasn’t drafted yet, I’ve created the following Draft Board Dashboard as a template for anyone to use to visualize your own fantasy football draft!

Utilizing the top rated fantasy football players from the Fantasy Pros website (link), I created a dataset in excel to build my draft board.  Here is a look at the fields in the dataset:

At the very least this viz requires the following fields:

To capture more detail in the viz, I’ve also included the following fields in the template:

Note that I created this template for a 16 team league.  If you have less teams in your league you can delete the extra teams from the dataset.  For example, if you only have 10 teams, filter the Fantasy Team Number column in the spreadsheet for teams 11 through 16 and delete those rows.   As your draft will have its own set of picks and teams, be sure to update the player data as well as the pick numbers.

Here is a copy of the dataset: Fantasy Football Draft Template

To create the Draft Board Dashboard in Tableau, I put the Fantasy Team Number and Fantasy Team Name on the columns shelf.  I hid the header on the Team Number but left it in the viz because it keeps the team names in order. On the rows shelf I put the Round Number.  By changing the viz to use Square mark types and adjusting the size of the squares, the main grid for the draft board was ready. 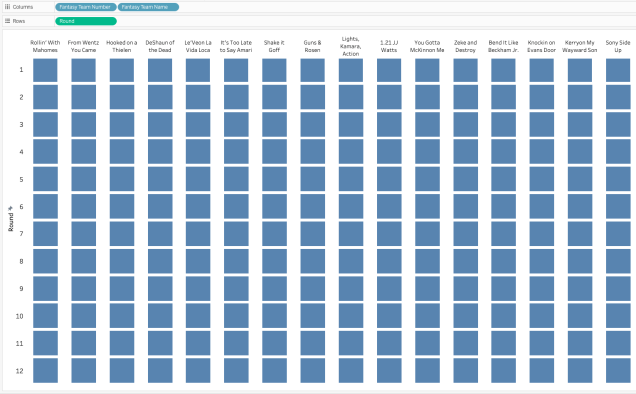 Player Name and Position were then added to each square.  A custom tooltip is also included that details the Players Team and which number they were picked, both in the round and overall in the draft.  Here is the final version:

The Player Position field is used on the color shelf.  After a real fantasy football draft, the colors can be used to see how various Player Positions were drafted throughout.  The Draft Board can be analyzed to answer questions like “was a kicker drafted too early?”, “which fantasy team started the run on quarterbacks in Round 7”, and “which position was drafted the most overall?”.

Draft Board Dashboard In Action

The most fun I had in creating this viz was animating the whole fantasy draft to see what it looks like as each pick is put on the board.  I placed the Overall Pick field on the Pages shelf in Tableau to create the Fantasy Football Draft animation. Unfortunately, Tableau Public doesn’t support animation for published vizzes.  However if you download the viz into Tableau Desktop, you too can create your own fantasy draft gif just like this!

The #DataFamtasy league draft will happen within the next month.  Once it does, I’ll create an updated viz and gif of our actual draft.  Good luck to all my fellow fantasy football players out there on your upcoming season!  If you create your own Draft Board Dashboard, be sure to tag me so I can check it out.

2 thoughts on “The Draft Board Dashboard: Visualize Your Fantasy Football Draft”